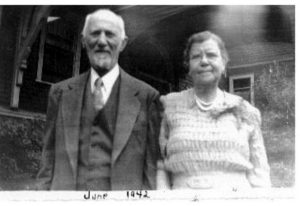 Max Toabe (1864-1952) came from Shepetovka, Russia in the early 1890s. He was the son of Michel and Chaya Gibbes (Irene Gibbs) Toabe. At the Port of Boston, he announced his name to the immigration officer as Mottel Toib. The man considered and said, “Here’s your name, Max Toabe.” Toabe tried factory work, but only lasted two days. He saw a man with a pack on his back, asked whom he worked for, and got started in Boston as a peddler. His route eventually took him to Plymouth. Max first appears in the Plymouth Street Directory in 1899, at 15 Howland Street.

Max did well as a peddler, and soon sent for his family. When they arrived in Boston he went to meet them. His two sons were there, accompanied by Max’s father, Michel, and sister Sarah (who later married Abram Sherman of Plymouth). Everyone was there except his wife, Sarah Berger Toabe, who had died on the way. Finding it difficult to raise two young boys, Toabe went to a shadchen (marriage broker) to find a wife to look after him and his sons. He married Ida Shecter, also from Russia, in 1899. Max and Ida’s son Mitchell remembered hearing how the entire family lived in two crowded rooms on Howland Street, near the gas works. The parents slept in the room downstairs, and everyone else slept in the loft above.

The Toabes soon moved to a house on Cherry Street in North Plymouth. Max peddled pots and pans until he was approached by Luigi Cortelli (L. Knife), who owned several buildings in North Plymouth. “Why don’t you sell your pots and pans in one of my empty stores?” Cortelli proposed. Max protested that he didn’t have enough money to pay rent. “Don’t worry,” Cortelli countered. “You can pay me rent when you earn enough money.” One day a man at the railroad station showed Max a load of damaged goods (toys?). “Why don’t you take these,” he suggested, “and have your family fix them to sell in your store?” This is how the Toabe family started a hardware business, which eventually grew to several stores all over the South Shore.

Father Michel Toabe had intended to return to Russia, but ended up staying in Plymouth until he died in 1904. He served as the community’s first teacher of Hebrew. While Max was a rather strict man, Mitchell Toabe remembers his elder brothers’ stories about how their grandfather Michel had a liberal and considered interpretation of the law. When the boys asked their father if they could go skating on Shabbat, he automatically said no. When they asked their grandfather, he said, “Let us consider the situation. If you should happen to go to services and have your skates with you… and you should go to a frozen pond that other people have skated on so no matter how much you skate, you aren’t cutting the ice… that’s not so bad.”

Max and Ida lived in North Plymouth through the early 1920s, when they moved to 60 Evergreen St. in Kingston to become the first Jewish family in that town. Besides Max’s two sons by his first marriage, Max and Ida had six children of their own.