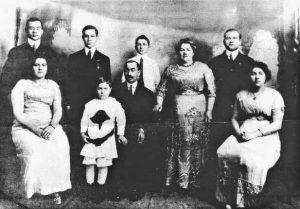 The Resnicks were Plymouth’s oldest and largest Jewish family. There were several branches of the family: Louis and David were brothers, who were joined by cousin Morris David and nephews Morris Benjamin and Simon Resnick.

Louis Resnick (1859-1939) and his wife Ida Bahn (c1865-1934) emigrated from Krackenowa, Lithuania in 1888. They arrived in Portland, Maine, where their first child Maurice was born the same year. They moved to Plymouth, where David was already living, around 1889. Their next child, Edith, born in 1889 or 1890, was one of the earliest Jewish children born in this town.

Louis Resnick first appears in Plymouth records in 1893 as a junk dealer, living on Russell St. near High St. By 1896 he resided at 23 Water St. By 1903 he and Ida had established a grocery store at his residence at 92 South St., a frame house that is still standing today. Eventually they opened a small store across the street where they sold candy, tobacco and magazines. On visits in the 1930s, grandson Bernard Resnick remembers watching his grandfather sitting in his store reading Argosy magazine. Nephew Morris B. Resnick, a cattle dealer, lived down the street at 96 South St. Louis, his brother, cousin and nephews all helped to found Congregation Beis Jacob.

Ida Resnick helped keep the store, as did the children, most of whom left school after eighth grade. During the summer she and the children picked blueberries, and tended her large garden at the rear of the house. She also kept chickens and ducks. Bern Resnick remembers how Ida sent each of her children’s families a freshly slaughtered duck for Thanksgiving dinner.

Louis and Ida had six children, only one of whom stayed in Plymouth. Eldest son Maurice (b. 1888) became a lawyer and moved to Bridgeport, Conn., where he was joined by his brother Harry M. (b. 1900), an accountant. Edith (b. 1890) married Nathan Sheinkopf and moved to Dorchester. Lillian (b. 1895) married Louis Shulman and moved to New York. Albert (1908-1972), the baby of the family, won a composition contest sponsored by the Plymouth Cordage Company to participate in the 1921 Tercentenary Celebration, commemorating the 300th anniversary of the Pilgrims. He later attended Boston University and followed in his brother’s footsteps in becoming a lawyer. He married Lillian Newman and moved to Boston.

The third child, Joseph George (1892-1972) worked as an iron molder for General Electric in Lynn, Mass, where he met his wife, Pauline Gershovitz. He was the first of the siblings to marry. The couple returned to Plymouth for the birth of the family’s first grandchild, Stanley David (b. 1915). After WWI, George Resnick took over the Plymouth bakery, located at 31 Mayflower St. until 1924, when the family moved to Lynn.

Benjamin Ralph (b. 1893) stayed in Plymouth. Known as Barney, he married Ruth Romanow, and ran a junk yard and tire store on Edes Street. During the 1920s and ‘30s he ran a gas station on Summer St.

None of the descendants of Louis and Ida live live in Plymouth anymore. Current CBJ board member, Dr. Barry Meltzer, however, is a descendant of Ida Bahn’s sister 😉