Frank (c1884-1968) and Ida Snyder Kabelsky (c1884-1933) came to Plymouth from Kovno Gobierna in Russia in 1907. They arrived at Ellis Island, with big feather pillows, and perene (feather mattresses). By 1908, when their eldest daughter Lilyan was born, they had moved to Plymouth.

The Kabelskys lived at 105 Sandwich St., in an area near many Jewish families. Frank worked at the Plymouth Cordage Company until around 1919, when he and Ida opened a second-hand furniture business across from the synagogue. Their daughter Nancy remembers that they had a horse and wagon for pick-up and delivery. Around that time they moved to a tiny house at 8 South Street, which today is a lot across from Pleasant Street. Ida’s brother, tailor Samuel Snyder and his wife Ada (Edith), lived nearby.

The Kabelskys had four daughters, Lilyan (Elizabeth Edith) born in 1908, Faye (Fannie) born in 1910, Martha, born in 1912, and Nancy Bella, born 1916. Nancy remembers hearing how she was named by Minnie Steinberg, wife of shokhet Joseph Steinberg. Apparently Mrs. Steinberg liked the name Nancy. By the early 1930s, the Kabelskys lived at 106 1/2 Sandwich Street, in a house behind 106, which was owned by the Skulskys. Rachel and Simon Resnick lived across the street at 105. The Kabelskys lived upstairs, and another Jewish family, the Bolotins, lived downstairs. Nancy remembers hearing Mrs. Bolotin coaxing her daughter Sylvia to eat her oatmeal, “Es, es, es!” 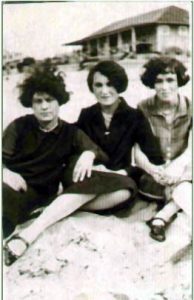 Shabbat at the Beach

In 1933, the family was struck by tragedy when Ida died suddenly. She suffered a fall, and died on the operating table in Boston. The three elder daughters went to work to help the family make a living. While Frank was a cheerful man who loved his family, he never made much money. Lilyan and Faye worked in local department stores. Lilyan, always beautifully dressed, did well and eventually became a buyer for Hudson’s department store in Michigan.

Around 1936, Frank and his daughters moved to 41 Summer Street, a house owned by Mr. Isaac Stein. As the youngest, Nancy had more freedom to visit the neighbors. She helped out by doing odd jobs, like babysitting for Joseph and Sylvia Cohen, who ran the Jewish grocery store down the street. The Dezorettes lived across the street, and Nancy remembers delivering Kosher lunches to Israel Dezorettes, who worked at the Plymouth Foundry on Water Street. Sometimes she even helped shokhet Jacob Steinberg, who lived on Pleasant Street, by holding the chickens while he slaughtered them.

Nancy, however, was the first of the Kabelsky sisters to leave Plymouth. In the early 1940s she set off for Detroit. The sisters were close, however, and all three soon joined her in Michigan. Nancy, who married Jack Cutler in 1954, remembers Plymouth fondly, and returns every summer to visit her childhood friend Rose Geller.