Join us for a South Shore Jewish Community Havdalah of Healing 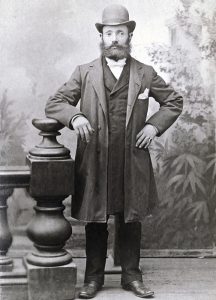 We’ll never know who Plymouth’s first Jewish family was. While there were German Jews working for the Cordage Company as early as the 1860s, the Jewish community was not really established until the 1890s. There were a couple of families here by the late 1880s, including the Resnicks and Joseph Berg.

Joseph Berg (1853-1941) was born in Russia/Poland in to Faby Berg and Leah Schmulowitz. In 1875 he married Ida. Ida Geneva Solomovitz (aka Gittel) (c1854-1939), born near Vilna, was the daughter of Harry and Ida Solomovitz. The couple had four children in Russia before Joseph left for America. According to family legend, he left Russia to avoid being drafted into the army, even breaking his trigger finger! He emigrated viia Hamburg on the Holland-America line, arriving in New York in 1888. From his naturalization papers, we know he was living in Plymouth by 1889.

In the 1893 Plymouth directory, Joseph Berg is listed as a peddler, residing at High St. near Russell. He sold men’s, women’s and children’s clothing, traveling with his horse and wagon. By 1896 he had a dry and fancy goods store at 289 Court St, in North Plymouth, where he also lived. From 1903 to 1913 his business was located at 395 Court St. Berg was involved in real estate. He bought the old Plymouth High School on Pleasant St., and took the lumber to North Plymouth to reuse. He built 291 Court St. as a tenement using the lumber, then added stores in front. He converted an old barn to a house, then built 289 Court St (now Balboni’s).

Meanwhile, Ida had stayed in Russia with their four children. Their youngest daughter, Celia, suffered from osteomylitis, requiring that she stay in the hospital for extended time. Ida resorted to washing floors in the hospital to be with her daughter. After several years of working as a peddler, Joseph was able to send for his family. Ida and the children set off for America, arriving on the Fourth of July, 1895 and coming directly to Plymouth. 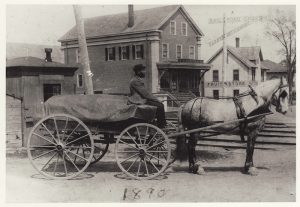 The family joined Berg at the house in North Plymouth, until they moved to 68 Summer St., which he had purchased in 1902. The family grew, as son Elmer was born in 1897. As one of the first Jewish homes in Plymouth, the Bergs’ house served as a stop for Jews traveling between Plymouth and Boston. Berg was one of the founders of the synagogue, and may have been involved in its construction. Along with David Resnick, Berg arranged the mortgage for the congregation when the synagogue was newly built. In 1913 he served as president of the synagogue. Ida was active in the Ladies’ Aid at Beth Jacob Synagogue.

Joseph was a hardworking, stubborn, proud, self-made man. His great grandchildren remember hearing stories about how strict he was, not letting his daughters comb their hair on Shabbat. Ida was a warm, nurturing woman, whose family remembers that she used guile and humor to handle her often difficult husband. Louis Stein and his father used to go to the Berg’s house at 68 Summer St. to make payments on their North Plymouth house. Louis asked to go along because Mrs. Berg made gingerbread, and would always give him a piece.

The Berg children grew up and worked in Plymouth. Two stayed in town.

Today many of the Berg great-grandchildren live in the Boston area, and are very proud to descend from one of Plymouth’s earliest Jewish families.